"There is a man living amongst us who may fairly claim to be the father of gold-mining in New Zealand.  His name is Edward Peters, native of Bombay, better known, perhaps, as "Black Peter," by old residents.  He was the first man to demonstrate by actual discovery, the existence of payable gold-workings in Otago; but he was poor, humble, and ignorant and did not know how to turn his discoveries to profitable account.  Wherefore he has been neglected, and the value of his work has been ignored except by the few who are acquainted with the facts; and the honours and the rewards that should have been his have been awarded to others....

"Black Peter is now old, infirm, and crippled - a confirmed invalid in fact - and unable to earn sufficient to supply himself with scanty sustenance...Therefore I appeal to the public, who so greatly benefited by the labours of Black Peter, to come forward and contribute to the fund now being raised in his behalf.... 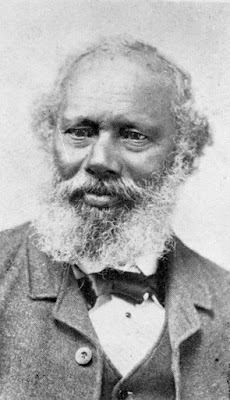 Edward Peters was born in Bombay (now Mumbai) some time in the 1830s - he could share early memories of the coronation celebrations for Victoria in 1837.  Around 1852 he arrived in Port Chalmers working as a cook on the ship Maori and promptly deserted.  After six months' jail for his desertion, he headed south to the Balclutha area and then into Central Otago.

Central was a sparsely-settled place back then, home to those first of the sheep and cattle farmers who had registered their land claims and then, with great effort and risk, driven their stock for weeks from where they were bought over to their new homes.

Peters settled in the Glenore area (now on the Central Otago highway just before Manuka Gorge) and worked building huts and driving bullocks for the farming landowners.  He also did some digging here and there in the local streams.  He had seen some mining in California in previous years and had some idea of the techniques involved.  Using only a sheath knife and a tin dish for panning, he found some gold in 1857 and sold it for food.  More of his gold went, the next year, to a Mr Dawson who had driven sheep to an Inch Clutha property - he had the gold made into a ring for his wife.

Edward Peters' discoveries were later described to another man with mining experience - Mr Gabriel Read - on his arrival in Otago in 1861 and it was Read who received the credit, and five hundred pounds, from the Otago Provincial Government for the discovery of the first goldfield in Otago.

Edward Peters got his pension and lived quietly at Port Molyneux for the next eight years on ten shillings a week.  A kindly neighbour made sure he was, for the last five years of his life, supplied with a house, a small garden and plenty of firewood for the winter.  His health declined and he was eventually overwhelmed by illness and taken to the Benevolent Institution in Caversham.  He died of tuberculosis ("pthisis") and was buried in a pauper's grave - unmarked - in the Southern Cemetery, Dunedin.

"In 'Black Peter' another of our pioneers has passed away, and his name must ever be associated with the early history of Otago.  Who will follow in the footsteps of the hardy pioneers who are gradually dropping out of the ranks one after another?  White handed labour is being overdone and snobbery is rampant in our colonial towns, but surely from the ashes of Bracken's 'kingly race of men' shall spring a stalwart, intelligent people, whose lives and actions shall make glorious a free, prosperous, democratic Australasia."   Mrs C R Mitchell, Clutha Free Press, 1893 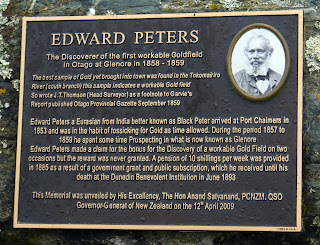 Posted by Otago Taphophile at 15:19 No comments: