Bransgrove of the Transvaal

In Dunedin's Northern Cemetery is a grave whose stone I had passed by several times before, visiting to find a different grave, I noticed its inscription. 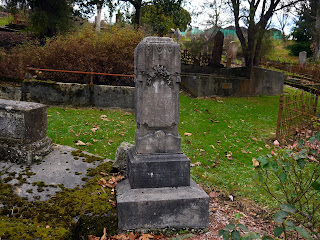 "Severely wounded in Boer and Zulu Wars" was an intriguing piece of history but there turned out to be much more to  the story of Henry (or Harry) Bransgrove.  Henry Bransgrove, I found, was involved in the ill-fated "Jameson Raid" - an attempt on the part of some renegade Imperialists to free the ill-treated gold diggers of the Transvaal and bring democracy to a region which had none.

Well, it did have some democracy, but the original inhabitants of the Transvaal (well, the original white inhabitants) were the only ones allowed to vote.  Well, the men were at least.

The Transvaalers were part of the Great Trek of Dutch South Africans to escape British rule and rules.  They established their republic in the northern part of South Africa and settled down to farm there.  Then someone found gold and the area was soon swarming with foreigners.

The foreigners, aka "Uitlanders," weren't such a great problem in themselves.  The gold rush brought higher demand for what the farmers could spare.  But they soon outnumbered the Boers and started to agitate for political rights.

The Transvaal government loosened its rules around voting, allowing men to vote if they had lived in Transvaal for four years.  For some, however, that was not enough.  For some others, it was an immense injustice that the gold of the Transvaal was in Boer territory and not that of its rightful owner - the British Empire.  To the man who had spent his life in the cause of making the world better (as he saw it) by making more of it British - Cecil Rhodes - it was an intolerable situation.

The Jameson Raid was a simple plan - stir up internal unrest, send troops in to restore order, eventually organise a plebescite and annexation.  To be more precise, a group of British miners would seize the armoury at Pretoria and elements of the Matabele Mounted Police plus volunteers (about 600 in all) would cross the border, under the command of Leander Starr Jameson - the Administrator General of the Chartered Company for Matabeleland (of which Rhodes was the Chairman).

But it failed in the first stage.  The group of Uitlanders in the Transvaal took too long to decide on their support for the coup and what the post-coup government would be like and, to help make up their mind, the troops were sent in anyway.  Some telegraph lines were cut - including the one which could have called them back when things were looking bad - but not the ones which alerted the Transvaal government to the invasion force.  They were defeated and taken prisoner after a five day incursion.

Harry Bransgrove's part in the Jameson raid is difficult to work out.  His 1908 obituary notes that he took part and also notes that he was present at Johannesburg when it was a collection of tin sheds.  Perhaps he was part of the raiding force due to his knowledge of the area.


Mark Twain on Cecil Rhodes:  I admire him, I frankly confess it; and when his time comes I shall buy a piece of the rope for a keepsake.
- Following the Equator
In 1899 the uneasy truce between Boer and Briton was broken again with the beginning of the conflict officially known as the Second Boer War.  Harry enlisted in the South African Light Horse, a unit made up mostly of Uitlanders.  He was at the Battle of Colenso, a failed attempt to relieve the besieged town of Ladysmith.  It was a very British defeat, its embarrassment covered by a small and glorious crop of Victoria Crosses.  Harry was wounded.

Harry also served with the Australian Commonwealth Horse, a unit which was raised in 1902.  Perhaps it was his military experience which suited him for the unit of new soldiers, perhaps he was chosen due to his father's Tasmanian origin.  Perhaps his wound meant that a training role was best for him at the time.

Harry returned briefly to his home town of Dunedin in 1906, having been in South Africa since 1892.  He then returned and served in the Transvaal Mounted Rifles in the suppression of what was called the "Bambatha Rebellion" - the resistance of a local chief to a poll tax imposed on his people by the British. This was very much a war in the "Blackadder" style, as exemplified by his trench-bound reminiscence of pre-war campaigning: "Well, you see, George, I did like it, back in the old days when the prerequisite of a British campaign was that the enemy should under no circumstances carry guns - even spears made us think twice.  The kind of people we liked to fight we two feet tall and armed with dry grass."

The warriors of the Bambatha weren't armed with dry grass but nor did they have any guns.  It was a short campaign.  Harry was wounded by an assegai thrust and "his sufferings...were intense, and were made greater by the fact that he had to pass through several field hospitals before he reached the base." - Otago Witness. 12/8/1908.

Harry underwent an operation at Durban which saved his life.  Chief Bambatha kaMancinza's fate was - depending on which story you believe - beheading on the battlefield or escape.  The centenary of his demise saw him named a national hero by the South African government and commemorated by a street name and a stamp.

The result of Harry's life-saving operation in Durban was not permanent.  He died at the Kensington Sanatorium in Johannesburg in 1908 and was buried in Dunedin's Northern Cemetery the following year.

Posted by Otago Taphophile at 16:06 No comments:

John McNeill grew up in Fairfield, Dunedin a son of Scottish parents.  He joined the Otago Infantry Regiment.  He was a coal miner, working in Christie's mine on Saddle Hill, and physical strength might have made up for his relatively advanced age on enlisting.

He was admitted to hospital in France on September the 18, 1917, suffering from "enteritis" - an inflammation of the intestine which is often caused by insanitary conditions affecting food and water - just the kind of conditions to be expected and guarded against in trench warfare.  His condition did not improve and on January 10th, 1918 he was in the hospital at Walton-on-Thames.  The New Zealand newspapers reported his admission, described as "not severe."

On the 17th of May he was placed on the "seriously ill" list - the next day he was dead.  He died of an abscess in his liver.  It's possible that the cause of his death went undiagnosed and was revealed by autopsy.


Posted by Otago Taphophile at 16:22 No comments: 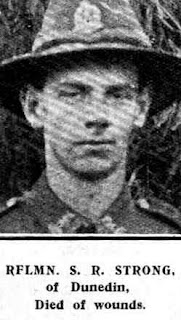 "Rifleman Stanley Robert Strong (reported died from wounds on May 20), was the eldest son of Mr Robert Strong, 42 Bay View road, Dunedin, and was 21 years of age. He was educated at the Alexandra, Musselburgh, and Otago Boys' High School. He entered the firm of W. Scoular and Co., and was employed by them until he went to Trentham. He entered Trentham in January 1917, and left New Zealand with the 24th Reinforcements on April 20. He reached France early in October and saw active service there. His parents received word three months ago that he was transferred to the Signallers, and he remained in that branch of the service till his death."

Stanley Strong died from multiple wounds, according to his official record.  He died from wounds to his "eye, hand, legs" - three short words that hide a world of pain.  No details can be found in the Rifle Brigade's official history of the action in which Stanley was wounded.  His personal record shows that he was wounded, evacuated and died.


"Nobly fighting, Nobly fell" is the brief epitaph attached to his death notice in the newspapers.

Posted by Otago Taphophile at 15:45 No comments: