BOYS WHO HAVE WON THE VICTORIA CROSS

Sir, — Are you aware that young Duncan Boyes, who is referred to in the article under above heading in a late issue, died in Dunedin about 28 or 30 years ago and was buried in the Church of England Cemetery (South), just inside where the old gate was, on the left hand side, where may be seen the headstone, inscribed, "Duncan Gordon Boyes, V.C.  died . . . 1869"? — I am, &c, J. F.  -Otago Witness, 5/8/1897.
Duncan Boyes no longer rests in the Church of England Cemetery (South), although his rare double gravestone is still there. 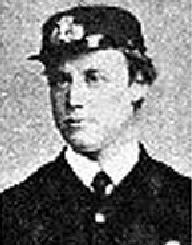 "We had a little war with Japan in '67.  A combined fleet of English, French,and Dutch undertook the little job.  A force was landed which destroyed the Japanese batteries whereupon the French and Dutch returned to their ships.  Hardly had they done so, when a strong body of Japs fell upon the British contingent.  They were repulsed, and took refuge behind stockades, whence they poured on our men a murderous fire of old nails, and even stones from their muskets.

"Then it was that a middy of H.M.S. Euryalus, young Duncan Boyes, showed his metal. He was carrying a colour with the leading company. Both his Colour-sergeants were shot, but he rushed on twenty yards ahead, and, as his commander afterwards said, appeared about to attempt the capture of the Japanese defences single handed. Indeed, no doubt he would have done so had be not been called back by the captain. His uniform was cut by the bullets, and no less than six had pierced the colours he was carrying. Well did he deserve the reward of valour."
For some reason, the Mail gets the date wrong here.  The "little war" with Japan was in 1864.

Duncan was only seventeen when he won the VC.  It was not long after that he was court martialled and dismissed from the Royal Navy for breaking into the Naval Yard in Bermuda after being refused admission due to not having a pass.  It is possible that this crime was one of many, hence the severity of the punishment.  Duncan never recovered from the disgrace.  He became depressed and, as they say, took to drink.  He went back to the family home at Kawarau Falls near Queenstown to try and get his life back in order.  In 1869, he broke down completely and fell out of a window to his death in Dunedin.  His death certificate states the cause of death as "delerium tremens."

Duncan was buried at the Southern Cemetery in a grave which is notable in Dunedin for having a footstone as well as a headstone. His remains were exhumed and transferred to Andersons Bay cemetery when the servicemen's section was established in 1954.  He must be unique in Dunedin in having two graves.  His VC is in the Lord Ashcroft Gallery in the Imperial War Museum, London.