The Otago Witness story ends there but I have a copy of the poem referred to in a volume titles "Poems and Sketches, Grave and Humorous" by "A New Zealander," published in London.  The poem is as follows:

GLENGARRY'S TOMB
For the last Glengarry goodly, Is this monumental pile;
Yet the world cynically rudely Whispers, "Was it worth the while?"
At the question straight comes o'er me, The entrancement of the seer;
And a high scene opes before me, And the pibroch fills my ear.
And the tartan tints that vary, Mark the badge of many a clan;
But the bonnets of Glengarry, I see foremost in the van,
When the wonted mode of battle, All but makes the spirit shout
With the slogan and the rattle, And the onset and the rout.
Thus my spirit, like the phoenix, Rising from its funeral pile
Gives the answer to the cynic's, Query "Was it worth the while?"
This is not a man we honour, Who might have his share of blame;
But in him we prize the owner, Of a proud historic name.
This the name that has been reckoned, Daring emblem of the Gael,
That in fight was never second, At the signal to assail.
That was it that at Culloden, Was as wonted,to the fore,
When Drumossie's Muir was sodden, With the gallant clansman's gore.
That it was that won fresh splendour, In Houg'mont's terrific fight,
Whose heroical defender, Foiled Napoleon's utmost might.
So when asked to name the proudest, Of that storied roll of fame,
Wellington ascribed the loudest, Tribute to Glengarry's name.
Vain the halo of such story, Of a proud and martial race,
To revive its fading glory,  Or arrest grim Ruin's pace.
Seeking 'mid New zealand's prairies, Fortune's favour to reclaim,
There the last of the Glengarries, Found a grave without a name;
In his fallen fortunes slighted, Fit type of that gallant race
Whose brave deeds their land requited, With like exile and disgrace.
Men of stature and of terror,  As they owned who felt their might;
And when won from ways of error, Bulwarks for their country's right.
Yet they who in every battle, Bore so well their country's cause
Were forced to give place to cattle, By that country's selfish laws.
The "New Zealander" was Dugald Ferguson (1833-1920) of Dunedin and Tapanui. 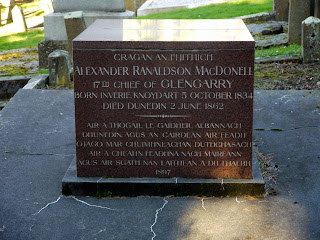 THE GAELIC SOCIETY
Mr D. McPherson, referring to a paragraph respecting one o£ the chiefs of Glengarry supposed to be interred in the Dunedin cemetery, said it would be a graceful act on the part of the society to further the object contemplated — viz., of erecting a memorial stone over his last resting place, — as well as looking after the graves of other Highlanders who may be resting in God's acre in this part of the world, and he concluded by reading a few original verses in English and Gaelic embodying the sentiments expressed in his speech.
Mr R. Rae spoke a few well-chosen words admonishing the society to continue the keeping up of their language and their Celtic traditions, and concluded by singing a Scotch song.  -Otago Witness, 12/12/1896.

Posted by Otago Taphophile at 19:05