A woman's name on a New Zealand cenotaph is a rare thing.  Esther Tubman gave her life for her country as much in the Army Hospitals as any soldier did in the trenches.


Born in Moa Flat, Central Otago in 1887, Esther Tubman was the fourth of six children of Jane Tubman and Edward Tubman, a farmer. Esther was educated locally and in her twenties began training at Dunedin Hospital to become a nurse. She sat and passed the state examination for nurses in 1913, and shortly afterwards began midwifery training at Dunedin’s St Helens maternity hospital.
Upon completing her nursing qualifications Esther was appointed as a visiting nurse attached to the tuberculosis department at Dunedin Hospital. She was then a district nurse for about a year before taking up private nursing. She worked in various parts of the country, including as matron of Denniston Hospital on the West Coast.
In June 1918 Esther enlisted in the New Zealand Army Nursing Service. She was the second member of her family to serve in the war; her younger brother Reynold Tubman, a private in the Otago Infantry Regiment, had been killed in action at Passchendaele during the disastrous attack on 12 October 1917. On 10 July 1918, Esther embarked from Wellington with the 40th Reinforcements for the New Zealand Expeditionary Force aboard the troopship Tahiti.
On 22 August the Tahiti called at Freetown in Sierra Leone, West Africa. People in the city had recently been infected with the deadly influenza virus, and although preventative measures were taken, within three days at least two-thirds of those on the ship were sick. The medical staff, including Esther, were quickly overworked and Esther herself soon became ill. She was probably the nurse mentioned in a letter home as seeming better one morning before suddenly worsening in the afternoon. ‘She raved terribly all night and next morning became unconscious.’
When the Tahiti reached England, Esther was taken to No. 3 New Zealand General Hospital in Codford, Wiltshire. She continued to deteriorate and was transferred to an isolation hospital at Salisbury, where she died on 18 September 1918. Esther was one of about 80 people who died after taking ill aboard the Tahiti. She was given a military funeral and buried in Tidworth Military Cemetery on 20 September. A tribute in a Dunedin newspaper after her death stated, ‘If ever a woman was born for nursing, she certainly was.’
Text and picture, courtesy of "NZ History" - URL: https://nzhistory.govt.nz/media/photo/esther-tubman, (Ministry for Culture and Heritage), 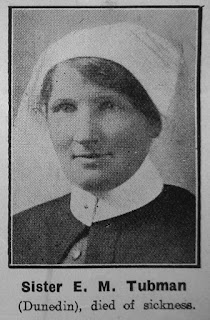 Senior Staff-nurse E. M. Tubman N.Z.A.N.S., Fortieth Reinforcements who died from sickness at Salisbury Hospital on September 18, sailed from New Zealand on July 10 in the best of health, and her death came as a very severe shock to her relatives. Sister Tubman was the second daughter of the late Mr Edward Tubman, Dumbarton, Roxburgh, Otago, and Mrs Tubman, of St. Kilda. She was born at Dumbarton on April 18, 1887, and was educated in the district school. She went through her training at Dunedin, St. Helens, and Karitane-Harris Hospitals. After finishing her course she was district nurse for 12 months, and undertook private nursing in different parts of New Zealand. Before she left New Zealand she was at the Denniston Hospital, West Coast. Sister Tubman had a brother killed in action in France on October 12, 1917.  -Tuapeka Times, 25/9/1918.

An Appreciation.
LATE SISTER E. M. TUBMAN.
It is very difficult for the sorrowing relatives and friends of Sister Esther Maud Tubman to realise that she, who left these shores in the very best of health with the 40th Reinforcements, can never return to New Zealand. Sister Tubman died in an English hospital on the 18th of September, a victim to cerebrospinal meningitis. Less than a year ago a brother was killed in action in France.
Former patients, including many of our brave soldier boys, can testify to her capability and efficiency. If ever a woman was born for nursing, she certainly was. She had the nursing instinct — that ever-present impulse to benefit the sick and the suffering — and her greatest happiness was in actively doing good. Nurse Tubman was thoroughly well trained in all the branches of her calling. She typified the genuine nurse in never being dismayed nor discouraged by any danger or hardship or unpleasant duty. She had that strong quiet nature which seemed to inspire her patients with the desire to get well in order simply to please her. It is one of the sad tragedies of this war that death has taken its toll of the splendid women who went to the front to nurse our wounded soldiers. From a high sense of duty Sister Tubman volunteered her services, and now Death has claimed her. She has given her life for her county —"[By R-C. in the Evening Star].  -Bruce Herald, 30/9/1918.

The last thing I would want to do for Essie's death - or anyone else's - is to romanticise it.  But I hope that, as she lay in her Isolation Hospital bed with knowledge that she might not survive an illness of whose toll she would be well aware, she was also aware of the lives she had changed, the suffering she had relieved and the loneliness and fear she had comforted with her dedication to the wounded and sick of the New Zealand Army.

NURSES' MEMORIAL SERVICE
IN ST. PAUL'S, DUNEDIN, ON SUNDAY.
The Otago Branch of the New Zealand Trained Nurses' Association have made adequate arrangements for a service at St. Paul's Cathedral on, Sunday afternoon as a memorial of the nurses who fell during the Great War. Those who died whilst on active service were:—
Sister Marion Sinclair Brown, drowned (Elverton).
Sister Isabel Clark, drowned (Oamaru).
Sister Catherine Annie Fox, drowned (Dunedin).
Sister Mary Gorman, drowned (Waimate).
Sister Ada Gilbert Hawken, died (Auckland).
Sister Nora Mildred Hildyard, drowned (Christchurch).
Sister Helena Kathleen Isdell, drowned (Kumara and Napier).
Sister Mabel Elizabeth Jamieson, drowned (Palmerston North).
Sister Mary Helen Rae, drowned (Dunedin)
Sister Lorna Aylmer Rattrav, drowned (Christchurch).
Sister Margaret Rogers, drowned (Christchurch).
Sister Esther Maud Tubman, died (Dunedin).
Sister Ella Kay Cooke, accident (Auckland).
Sister Lily Lind, French Flag Corps, died (Wellington).
The place mentioned in each case is that of the training school. The memorial service is also in honor of the 33 nurses who died in New Zealand during the influenza epidemic of 1918. The Fourth Regiment Band will play before and after the service. The service is to be conducted by Canon Nevill; Chaplain C. J. Bush-King will read the lesson; Chaplain D. Dutton has been appointed to deliver the address; the anthem is Spohr's 'Blest Are the Departed,' sung by the Cathedral choir, with Mr Heywood at the organ. The offerings of the congregation, after certain deductions for expenses, will be handed to the New Zealand Nurses' Memorial fund.  -Evening Star, 22/10/1919. 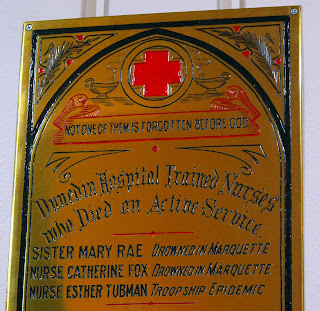