Edward Moritz Theomin was the only son of David Theomin, known these days in Dunedin as the rich merchant whose house, Olveston, was donated by his surviving daughter Dorothy to the people of Dunedin after her death in 1966.

I am grateful to the staff of "Olveston" for some information on his life, as well as the images I have used with their kind permission.

Edward was educated at Otago Boys' High School and, befitting the heir to his father's business, he began work in David Theomin's warehouse in 1901. 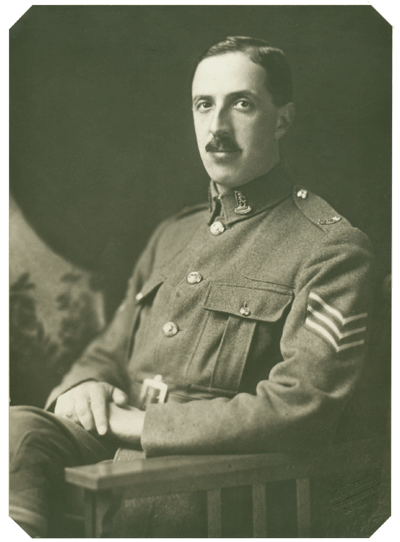 Edward volunteered for the army in January, 1917, at the relatively  mature age of 31.  At the time he was manager and buyer for the Glendermid Tannery, in which his father had an interest.  The tannery was regarded as an essential war industry and Edward was exempt from the draft.
Edward must have shown some aptitude for soldiering - his record shows that he was promoted to Sergeant in September on 1917 and that he passed the examination for a Commission that December.

His rank reverted to Corporal on arriving in Britain - presumably it was Sergeant on embarkation (and the same thing happened to my father - he was a Sergeant at Burnham during WWII but reverted to a lower rank on account of the difference in experience between new arrivals and those who had seen action). He was confirmed in the rank of Corporal before crossing the Channel to France in February, 1918.

On arrival in France he contracted bronchitis and, on recovery, was transferred to the Entrenching Battalion - a second-line unit - with which he stayed for only a couple of months before being evacuated with bronchitis. On recovery he was posted to the UK and, at the end of 1918, was demobilised for a period of three months, after which he was discharged as medically unfit due to chronic nasal catarrh in February of 1919.

He met his future wife, Ethel Grace Mocatta, in London at the end of the war and brought her to New Zealand to be married.


Mr Edward Theomin, son of Mr D. E. Theomin, managing director of the Bristol Piano Company, was married in Dunedin yesterday. At the invitation of the managing director, the staff of the Christchurch branch of the Bristol Piano Company gathered at their depot yesterday afternoon, and, under the direction of the local manager (Mr R. A. Home), spent a pleasant half-hour toasting the health and happiness of the young couple. Mr Edward Theomin quite recently returned from the front after two years' service with the New Zealand Forces as sergeant. He saw the war through. He met his bride in England, and she came out here to be married. In proposing the toast of the bride and bridegroom, Mr Home made eulogistic reference to the services rendered the country by the bridegroom, and said that after hazarding many dangers for the Empire, he had met the happy fate of all men, or most, and brought his bride to New Zealand. Mr Edward Theomin, according to Mr Horne, was "a chip of the old block" and it was to such men as these that New Zealand owed its progress — more could not be said. The toast was drunk with musical honours, and an enjoyable half-hour was spent by the staff in honouring the son of its worthy managing director.  -Press, 21/5/1919.

NOTES FOR WOMEN
Mr and Mrs Theomin, of Dunedin, arrived from England by the Moana on Saturday. Mr Theomin has been on active service.  -Auckland Star, 9/7/1919.


The Olveston website states that Edward contracted encephalitis lethargica - a mysterious disease which has occasionally swept through (at least) the western world in recorded history.  It is also known as Sleeping Sickness. Its last pandemic appearance coincided with, and was possibly linked to, the spanish flu pandemic of 1919.  It is the disease which caused the parkinsonism-like symptoms described by Dr Oliver Sacks in his book "Awakenings." Dr Sacks was played by Robin Williams in the movie of the same name.

Edward was diagnosed in 1922 and died six years later.  The progress of the disease would have been slow, tragic and inevitable.

Edward is difficult to track through "Papers Past" due to his first name being the same as his father's middle name.  His last verifiable action, according to the newspapers, is in May 1924, at a meeting of local business people, which has him stating his position as a manager of Glendermid tannery re trade with the then Dutch East Indies (now Indonesia.)

In March of 1926, Edward advertised for a chauffeur who could also do some gardening - it is possible that he was no longer able to drive for himself.

The last reference to him in society that I have been able to find, until his death, is dated to the end of November, 1927 - a year before his death.  He and his wife are reported as aboard the "Marama" bound for Sydney.

His death would have been a heavy blow for the rest of the family, which had lost his mother, Marie, just a couple of years before.

Reference to the death of Mr Edward Theomin was made by the president of the Chamber of Commerce (Mr Rosevear) at a meeting of the council of that body last night. The speaker stated that a letter of sympathy had been sent to Mr D. E. Theomin. Those present stood in silence for a few moments out of respect for the memory of the deceased.   -Otago Daily Times, 20/11/1928.


Edward and Ethel had no children. With the death of Edward's father, David, in 1933 the house and business were inherited by Dorothy who never married.


Probate was granted yesterday of the will of Mr Edward Theomin, of this city. After making various bequests and provision for the testator’s wife, who has a life interest in the estate, the will provides that the whole estate shall be vested in the Perpetual Trustees, Estate, and Agency Company for the formation of a Theomin Trust, the proceeds of which shall be applied to charitable and educational purposes.  -Otago Daily Times, 28/11/1928.


The Theomin Trust was added to by David in his will and operates still.

Posted by Otago Taphophile at 17:57