An interesting article appears in the Nineteenth Century for May, written by one who took part in the Balaclava charge, and who tells the following story of the late Sergeant-major Bevin, of the Otago police: — "A strange thing happened this afternoon. Private John Bevin, of the 8th Hussars, had been having his wounds dressed. A Russian cavalryman, who was lying on the opposite side of the hut, and who had two desperate sword cuts on the head, and three fingers off, had been looking hard at Bevin for some time. At last he got up and crossed the floor, and made Bevin understand that it was he who had cut the Russian about so severely. Bevin cheerfully owned to the charge, and pointing to the fragment left of his own right ear, gave the Russian to understand that it was he who had played the part of St. Peter, whereupon the two fraternised, and Bevin had to resort to much artifice to escape being kissed by the battered Muscovite.  -Oamaru Mail, 24/8/92.
John Bevin was a long way from the Crimea when he dropped into a fatal diabetic coma in May of 1892.  He was also a long way from County Cork, back in Ireland, where he was born in 1831.  He was a carpenter's apprentice when he joined the 8th Royal Hussars - the "King's Own" in 1849.  In 1854 he sailed with his Regiment to Bulgaria, to fight the Russians.

From there he went to the Crimean Peninsula, was present at the Battle Of Alma - an infantry battle - and charged in the Light Brigade attack on the Russian guns at Balaclava.  He was taken prisoner after the charge and eventually exchanged for Russian prisoners held by the British.  In all, he was wounded 18 times during the war - none of them seriously though he carried a slit on his ear to the end of his days.

When the 8th Hussars were put on a peacetime basis they reduced their numbers and Bevin was discharged.  He declined an offer of ten pounds from a fellow Trooper who wanted to change places with him and went to Victoria, where the gold rush had begun. In Victoria, he joined the goldfield police and was recruited for the Otago Armed Constabulary by its organiser and first commander, St John Branigan, arriving in Dunedin in 1861.  One of his duties as one of "Branigan's Troopers" in those early years of the Rush included the escorting of the gold convoy through Central Otago to the bank at Dunedin. 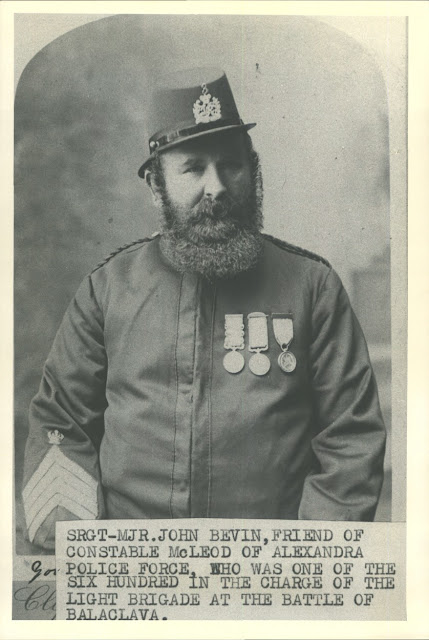 Constable Bevin quickly showed his competence and was promoted to Sergeant Major after a year in Otago.  He was awarded two pounds from the "Police Reward Fund" in 1869 for the "zeal and perseverance" shown with another constable in the detection and arrest of a pair of forgers.  He was awarded the Police Long Service Medal in 1887.  He was popular with Dunedin's citizens, from the Judges on the Bench to those they judged - ...his fairmindedness softened even the natural antipathy of the criminal classes to a police officer into a reluctant admiration. - 14/5/1892 Otago Daily Times.

He was also awarded a unique distinction in 1882 by some of Dunedin's citizens.  The Evening Star reported: The Mayor said that he was unexpectedly called upon to make the presentation, and was unprepared to do so. The duty he had now to perform was more pleasing than anything that had fallen to his lot during his ten months in office, and he had much pleasure in being requested to take part in tho ceremony. He referred in glowing terms to the pluck shown in the Crimea by the British soldiers, and said that if again called on Sergeant-major Bevin would be equal to the occasion. In future historical records this encounter would stand out pre-eminent. The presentation, which consisted of a very handsome silver cup, would bear this inscription; "A tribute of respect and esteem to Sergeant-major Bevin from many Dunedin friends, to remind him of the twenty-eighth anniversary of the Light Brigade's charge at Balaclava." And on the reverse side: "At present in the Otago Constabulary, and late of the 8th Royal Irish Hussars." He had also much pleasure in presenting a silver negligee and locket to Mrs Bevin.  In conclusion he expressed the hope that Sergeant-major Bevin would be long spared to keep his present position in this community. — (Applause). Sergeant-major Bevin said that the presentation was quite unexpected on his part. It was only two or three days ago that Mr Graham called on him with reference to the matter. It was contrary to the service regulations for an officer to be permitted to receive a gift, but Inspector Weldon kindly acceded permission. The speaker then made a long statement as to the service his corps performed in this war. He defended the Earl of Cardigan from aspersions which had been cast on his character, and said that that gentleman was in no way to blame for the charge. The men had simply done their duty, and those who had survived would be equally pleased with himself at the forethought and kindness of the people of Dunedin as manifested on the present occasion.

An interesting example of John Bevin's experience as a policeman comes from the "Otago Witness" of 1889: At the City Police Court on Monday morning an elderly man of seedy appearance was charged with drunkenness. He presented himself in court with a bundle of second-hand books in a strap under his arm, and appeared to be a travelling bookseller. He was somewhat voluble of speech; and bore on his countenance the unmistakable signs of long dissipation. On being asked how he would plead he said, "I am guilty, but under most peculiar circumstances." The Bench naturally desired to hear all about the matter. Then, in a tone which he evidently meant to be pathetic the victim of circumstances related his griefs. He had lost a nephew he said, by some disaster on board an American man-of-war, and he felt sad at heart. He had, indeed, been very sad for a long time, and consequently took a "little drop," but a small quantity of drink had a terrible effect upon him. He then asked the bench to be lenient with him as he had a large family, and had to work hard to keep them. Here his emotion, apparently overcame him, as he drew forth his handkerchief and wiped away his tears.  Sergeant major Bevin, who had come into contact with the accused in an official capacity on a number of previous occasions, informed the bench that whenever the accused came before the court his plea was that a death, or a birthday, or something of that sort had proved too much for him. This caused accused to plead with the Sergeant major not to be too hard upon him. "You military men," he said, "are always hard, whether in peace or in war." The Bench inflicted a fine of 10s, with the usual alternative. The disconsolate one asked for time to pay, and this being conceded he bowed and respectfully thanked the bench. As he left the court a gleam of satisfaction at his "success" was discernible on his rather dirt-begrimed visage.

Sergeant Major John Bevin's last appearance on duty, after nearly 31 years' service, was at the handing over of the Reverend Thomas Burns memorial in the Octagon, Dunedin.  No one who saw him there would have thought he had little time left on earth.

Posted by Otago Taphophile at 15:07