The 1990s were a wild time...it was the time I ran for Mayor of Dunedin.  Although not done entirely seriously, it was a real education for me.  It was also a whole lot of fun.  In an era when Winston Peters ran on a platform of "a vote for me is a vote to kick National out of power" - then helped them form a government, and when Jenny Shipley proclaimed herself the first NZ female Prime Minister - and declined to ask the people for a mandate to rule, I could claim to be the only honest politician in the country.  But enough about me...

At the campaign launch a woman approached me and said that, if I promised to raise a memorial to Samuel Saltzman, I would have her vote.  I was more than happy to make that promise.  But who was Samuel Saltzman?

Samuel was a tailor.  He was a Polish Jew, born in Kurow (not the one in the Waitaki Valley) in 1881, and apprenticed to a tailor at the age of thirteen.  It was a hard life in small-town Poland and Samuel decided to make the move to Warsaw, about 250km away.  Things weren't much better in the city and he and a friend decided to try their luck in Britain.  Arriving in London almost broke they followed a man carrying half-finished clothes through the streets to a tailoring business.  Their hunch paid off and they were employed by the tailor for whose business the clothes were bound.

Conditions were still hard for Samuel but he was able to save a little money and head to the New World.  He arrived in Canada and made his way to the US, working and travelling south until he found himself in New York.  There he specialised in ladies' tailoring.  Finding that work had become seasonal, he began to use his off-season time in travelling.  Eventually he found himself in California and from there, having read a newspaper story extolling the virtues of the colony of New Zealand, he sailed for Wellington.  His skills saw him employed within a couple of hours of landing.

He eventually went into business for himself as a ladies' tailor first in Christchurch and then Greymouth.  His 1910 advertisement in the Greymouth Evening Star stated that: "As a practical LADIES TAILOR and CUTTER (he) has opened a Ladies' Tailoring establishment in Greymouth, and being in close touch with the latest PARISIAN FASHIONS, and carrying stocks of the newest designs of Cloths, Worsteds and Serges in all shades will be in a position to supply garments of elegance and taste and of the choicest fabric, and bearing that touch of refinement which so much conduces to grace and attractiveness. S. SALTZMAN makes a close study of each client, and with his long experience as a SPECIALIST, is able to suggest just the shade of fabric required and to impart that delicacy in CUTTING which produces a garment of artistic beauty."

In February 1917 Samuel closed up and moved to Dunedin, setting up shop in George Street.  He prospered and began writing cheques for worthy causes, both local and not so local.  Here is a list of them:

October, 1935.  1000 pounds for the Grey Hospital Board for a TB block.  "During his residence in Greymouth, he says that he received all the hospitality and support one desired from citizens and he considered it a duty and a privilege to be able to express his appreciation of such support in some tangible way."

October, 1935.  1000 pounds to the Dunedin Hospital Board for instruments to be used in the eye, ear and throat theatre.

March, 1936.  1000 pounds to the Dunedin Methodist Central Mission for the children's health camp at Company Bay.

May, 1936.  1500 pounds to the Waitaki Hospital Board for an open air children's ward - eight beds, a playroom and solarium.

May, 1936.  3000 pounds to the Waipiata TB Sanatorium for the erection of an administration block.  "...Mr Saltzman is making the money available at once. Mr Saltzman is a most public-spirited citizen, for other institutions have recently received substantial gifts from him.” 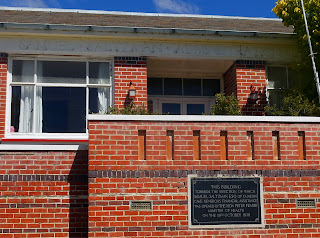 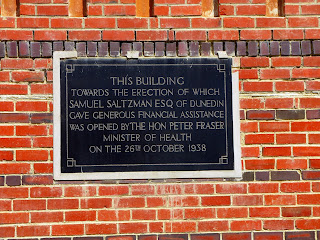 October, 1936.  6500 pounds to the St Johns Ambulance, to build their headquarters at the base of York Place. 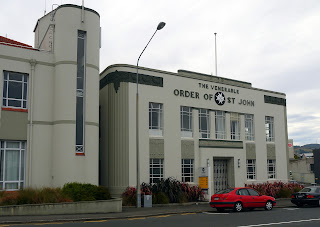 November 1937.  275 pounds to the Dunedin Hospital for further equipment at the eye, ear, nose and throat theatre.

March, 1940.  1200 pounds to the Dunedin Jewish Congregation for the purchase of a residence for the minister.

March, 1940.  500 pounds to the Otago Provincial Patriotic Council for soldiers' welfare.   "As a citizen of the British Empire I deem it my duty to help at least in a monetary way those young and valiant men who arc willing to sacrifice their lives for their country's cause.  I therefore enclose a cheque for £500 for the patriotic fund which may be disposed of in whatever direction you may consider necessary. I may also say that, should any occasion arise when my help is required, I shall deem it my duty to assist in whatever way possible." - S Saltzman, letter to the Council.

As well as his more official donations, Samuel aided many of Dunedin's poor during the Great Depression of the 1930s with donations of blankets, food and coal.  He was made an Officer of the Order of the British Empire in 1939 ("For benefactions to humanitarian institutions in the Dominion of New Zealand.") and in an interview of that year for the Otago Daily Times said: "When I sat at my easy chair beside the fire in the winter time in those years, I could not enjoy my own fire. I had to do something so that others could share that comfort.”

Samuel retired from business in 1946 and lived in the Leviathan Hotel until his death, hit by a car outside the Otago Medical School in Great King Street, Dunedin, in 1963.  He died of shock and concussion at the age of 82.

“I have only served in the way it has been possible for me to help.  While money may satisfy the physical needs and the individual comforts it will not give happiness unless it is judiciously applied. It seems to be part of a great immutable law that help given to others invariably brings happiness to the giver.” - Samuel Saltzman. 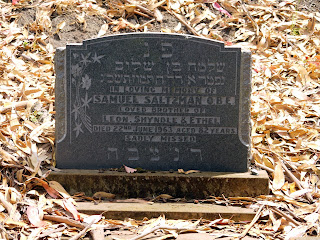 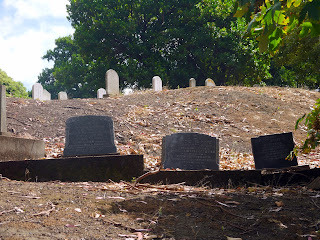 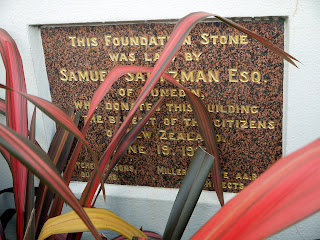 PS:  According to his obituary, the friend with whom Samuel Saltzman sailed to London also went on the the United States and became a millionaire film-maker in California. Born in Poland as Schmuel Gelbfisz, later calling himself Samuel Goldfish and then Goldwyn.

Posted by Otago Taphophile at 16:28