The late Gunner Robert Francis Berwick, who died at Palmerston on February 10, was the third son of Mr William Berwick, of Wellington. The deceased soldier was born at Caversham and received his education at the Caversham School. He left New Zealand with the Sixth Reinforcement draft, and after three years' service was invalided home. He was well known among railway men, having been employed in the Railway Department for a number of years, but prior to enlisting he was engaged in farming operations near lnvercargill. His death will be felt by a wide circle of friends.  -Otago Daily Times, 3/3/1919.

FOR KING AND COUNTRY.

Robert Berwick left New Zealand in August, 1915, and served in Gallipoli and France.  He reported sick with jaundice at Gallipoli and spent some time in hoospital on Malta.

He was appointed cook in March, 1916, shortly before embarking for France and held the post until the following august.  He was then admitted to the No. 1 NZ Genral Hospital at Brockenhurst with influenza, which became bronchitis, which became tuberculosis.

He was invalided home on the HS "Marama" at the end of 1917 and sent to the TB hospital at Pleasant Valley near Palmerston, where he died.  Doctor's notes on his record stated "This patient was suffering influenza which masked the signs of phthisis (TB) in his chest."

By the time Robert's commemorative plaque and medals were sent to his next of kin in 1929, his wife Mary had remarried. 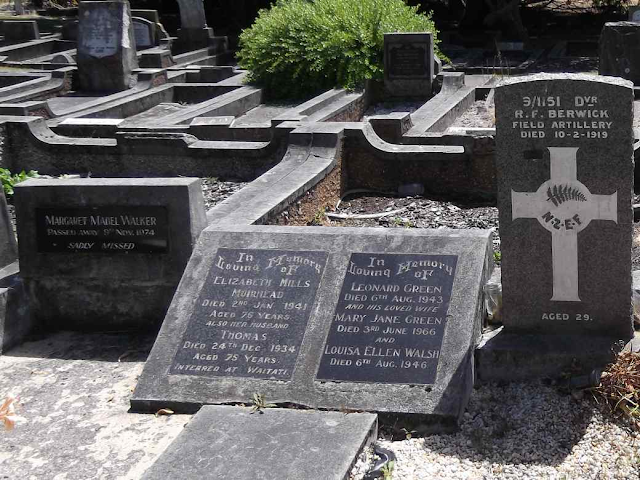 Posted by Otago Taphophile at 14:41