A week ago I was at a surprise birthday party in the Culling Lounge of a football club beside Culling Park.  Across from the clubrooms can be found Culling street.  Naturally, I wondered what was significant about the Culling name.  I found references to an Otago settler of 1849, a businessman and a triplane pilot.  You can guess which Culling I chose to research.

DISTINGUISHED SERVICE MEDAL.
Information has been received that Flight-Lieutenant Thomas Grey Culling, son of Mr. and Mrs. Culling, of Victoria Avenue. Remuera, has been awarded the Distinguished Service Medal. Unfortunately Lieut. Culling has been reported missing since the 8th of June. He is 21 years of age, and came to Auckland with his parents from Dunedin eleven years ago. He received his education at King's College, and went to England, where he joined the Aviation Service.  -Auckland Star, 25/6/1917.

Thomas Culling was born in Dunedin, the son of a prominent businessman and local politician, grandson of a settler who arrived in 1849.  He went to Musselburgh School and the family moved to Auckland in 1906.

He volunteered for the Army at the beginning of the Great War but was prevented from serving by his father, who was able to object due to Thomas' age.  In August 1915 Thomas travelled to England and joined the Royal Naval Air Service.  His service record at the end of training carries the note: “Perfect in every way. Good type of officer.”

In September 1916 he was posted to No. 1 Squadron, RNAS.  At the end of 1916, No. 1 Squadron was flying the Nieuport 17, a light and manoeuvrable biplane (more a sesquiplane, with the lower wing much smaller than the upper) with a single machine gun.  The 17 ruled the European skies in 1916 - by the end of the year it was losing ground to the latest German type, the Albatros D-III.

No. 1 Squadron converted to the Sopwith Triplane in December, 1916.  They were the first Squadron to use the new design and it was a success from the start, with a high ceiling and exceptional rate of climb, as well as the turning ability (in one direction) inherent in a rotary-engined aeroplane in which the propeller is bolted to the engine which spins to cool its cylinders and makes for a good power-to-weight ratio.  The enemy immediately began to build triplanes themselves - many different designs, of which the Fokker Dr1 of "Red Baron" fame was the only successful one.

Thomas scored three aerial victories in April, 1917 - a period of the war known by British flyers as "Bloody April." British forces were attacking German forces at Arras and aircraft were being used as fighter-bombers as well as air superiority and reconnaissance.  This aggressive strategy was successful but at a high cost to British airmen.

Thomas' second victory was a famous one, gained with the top Australian ace Roderic Dallas, who had tested the Triplane by reaching 26,000 feet, returning to his airfield with frostbite.  Dallas was another excellent pilot, who must have seen excellence in Thomas' flying, choosing him as his wingman.  This is from Dallas' Wikipedia entry: The combat of 23 April became known as one of the classic air battles of the war. Dallas and his wingman Thomas Culling took on a squadron-sized formation of 14 German aircraft, having gained an altitude edge over their foes. The naval aces exploited this edge by making quick diving attacks from opposite sides, culminating in short bursts of machine-gun fire. Using the Triplane's superior climbing ability, they would then bob back up to position themselves for the next assault. In contrast to the usual hit-and-run tactics of most dogfights, the RNAS duo launched at least 20 gunnery runs over 45 minutes. The Germans were forced progressively lower, into disarray, and then chased back over their own lines. While they shot down three of the Germans, Dallas and Culling also achieved a more important outcome by blocking and then breaking up a determined enemy effort against the British ground offensive. The action led to the award of a Bar to the Distinguished Service Cross for Dallas, and a Distinguished Service Cross for Culling, which were gazetted on 29 June.

The status of "Ace" for the RFC and RNAS was achieved with five aerial victories but was not encouraged by British command as they saw its publicity as detracting from the efforts of equally brave reconnaissance and bomber crews.  Individual scores were not published by British papers until later in the war.

Thomas achieved three more victories in May, 1917, and then was shot down himself the next month.  He was one of four pilots sent up to deal with a German intruder and they found seven more in the sky above Ypres.  His body was never found, which suggests that he fell in no-man's-land and his aeroplane and body were obliterated by shell fire.

DISTINGUISHED SERVICE MEDAL.
Information has been received that Flight Lieutenant Thomas Grey Culling, son of Mr and Mrs Culling, of Victoria avenue, Remuera, who has been awarded the Distinguished Service Medal, has been reported missing since June 8. He is 21 years of age, and went to Auckland with his parents from Dunedin 11 years ago. He received his education at King's College, and went to England, where he joined the Aviation Service.   -Otago Daily Times, 27/6/1917.

Flight-Lieut. Thomas Grey Culling, R.N.A.S., who has just had conferred upon him the Distinguished Service Cross, is the only son of Mr. T. S. Culling, of Remuera. On April 25, 1917, with two other machines, he engaged a formation of nine hostile scouts and two-seater machines. Two two-seater machines were shot down, one of them by Flight-Lieut. Culling unassisted, for which deed his work has been honoured.   -NZ Herald, 27/8/1917.

Since the commencement of the war, a number of the staff have done invaluable patriotic service in organising and encouraging the making up of material for our soldiers. The response of ex-scholars to the call of his Majesty's service is a matter of deep interest to the district. Donald Harper, Victor O'Keefe, Edgar White, Henry Sutherland, Malcolm Tyson, Leonard Harris, Walter O. Parker, Thomas Culling are the names of those who appear on the merit board as having paid the supreme sacrifice, or, in the case of Thomas Culling, as missing.   -Otago Daily Times, 20/4/1918 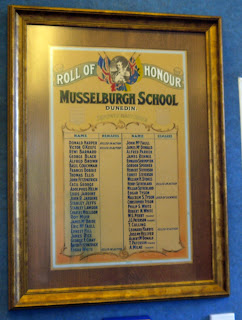 GALLANTRY REWARDED.
FOUR POSTHUMOUS AWARDS.
PRESENTATION TO-MORROW.
The four war medals to be presented by His Excellency the Governor-General at a parade of city territorial units and senior cadets in the Town Hall to-morrow evening are posthumous decorations, the recipients in each case having died since the awards were gazetted. The ceremony will be of particular interest, inasmuch as the Victoria Cross will be presented to the father of Lieutenant-Commander W. E. Sanders. The particular act of gallantry for which this officer, whose heroism has been ranked with that of some of the greatest naval heroes in history, has not yet been announced by the Admiralty.
The troops will parade on Queen's Wharf at 7 p.m., and His Excellency will take the salute inside the wharf gates. The Coast Defence Infantry detachment will provide a guard of honour of 100 men, and the Maori reinforcement at the Narrow Neck camp will provide a bodyguard of 50 men. The bands of the 3rd Auckland, Mounted Rifles, the Garrison Artillery, the 3rd Auckland, Infantry Regiment, and the Senior Cadets will parade with their respective units. Following are the particulars showing the nature of the awards, the recipients' names, next of kin and brief details of the deed or deeds which earned the decoration : —
Lieutenant-Commander William Edward Sanders. R.N.R. — Mr. K. H. Sanders, Takapuna, father. In recognition of conspicuous gallantry, consummate coolness and skill in command of H.M. ships in action. Gazetted June 22, 1917.
Captain Arthur Charles Hubbard. Auckland Regiment — Mrs. E. A. Hubbard, Paeroa, mother. For conspicuous gallantry and devotion to duty. He displayed great courage and initiative in leading his company in the assault on the enemy front line. Later, he was largely instrumental in rescuing several wounded men. Gazetted April 17, 1917.
Flight-Lieutenant T. G. Culling — Mr. T. S. Culling, Remuera, father. In recognition of his services on April 23, 1917 when, with two other machines, he engaged a formation of nine hostile scouts and two-seater machines. Two two-seater machines were shot down, one by Flight Lieutenant Culling, unassisted. Gazetted January 22. 1917.
Corporal R. Myers — Thomas Myers, Ranganui, brother. For conspicuous bravery on the field. Gazetted December 8. 1916.  -NZ Herald, 18/6/1918.

ON SERVICE
NEW ZEALANDERS OVERSEAS
PROMOTIONS & APPOINTMENTS
(FROM OUR OWN CORRESPONDENT.)
LONDON, April.
Flight-lieutenant Thomas Grey Culling, R.N.A.S., who has been missing for some time, is now officially presumed to have been killed. He was the only son of Mr. T. S. Culling, of Remuera, and got his commission in the R.N.A.S. two years ago. He had seen a great deal of service on the coast of Flanders, and in June last year he was awarded the D.S. Cross for gallantry in action two months earlier. With two other machines in company he engaged a formation of nine hostile scouts and twoseater machines. Two of the latter were shot down, one of them by Lieutenant Culling himself.  -Evening Post, 19/6/1918.