There were a number of groups of Maori prisoners who were taken to Dunedin in the late 19th century to perform hard labour sentences. In 1869, a group of men involved in what is known as "Titokowaru's War" or the "Third Taranaki War" arrived in Dunedin, after having come close to defeating North Island colonial forces.  They fought under Riwha Titokowaru of Ngati Ruanui in their attempts to prevent the encroaching taking of their land by settlers.

In late 1869 a group of 74 of Titokowaru's men, who had been captured at Patea, sentenced to death and had their sentences commuted to various terms with hard labour, arrived at Dunedin aboard the "Rangitira."  The reportage is reflective of the attitudes of its day — some opinions at the time were much harsher.  But this is the story, as much as I can find, of Watai Tumoerangi.

Watai Tumoerangi's death was the second suffered by those who had arrived on the Rangitira.  The prison chaplain, John Torrance, was there as he died and recounted his experience in his 1908 memoirs.  Although some of Torrance's narrative is filtered through his personal religious beliefs, it remains a remarkable encounter with history.

The death scene of one of them was engraven on my memory.  There was nothing remarkable about it.  It was simply pathetic and impressive.  He was a man of slightly over 30, and had a wife and children at his native pa in the far north, and his old father shared his exile.  His illness was so sudden and rapid as to make his removal to a hospital impossible.  A prison cell was therefore his sick and death chamber.  It was night.  Close to the sufferer was a small table provided for the occasion; on it were two lighted candles and an open Maori Bible, and the only sounds heard were the laboured breathing of the dying man and the measured tread of the warder in the  adjoining corridor.  The old tattooed father sat at the foot of the bed, his head resting on his hand, while his eyes, with a look of indescribable agony, were fixed on his son's face.  The chief warder and I were the only others present.  Just then, through a break in the clouds, the silvery light of the full moon passed in between the bars of the small window and halted for a few seconds on the inner side of the cell door.  With a smile and exclamation and pointed finger the dying man directed his father's attention to it.  The old man turned and looked, and, with a nod, said something in response.  The Psalmist speaks of the light that rules the night as one of God's faithful witnesses in the heavens.  The momentary ray suggested some thought to the sufferer.  I know not what.  Perhaps it made him think of the greater Light - the light of the world and of men - and of the divine faithfulness of which He is evidence; and maybe, also, the suffering had some thought of the light of the eternal day beyond the dark valley through which he was passing.  After a brief silence the young man again spoke to his father, at the same time turning his eyes on the warder and myself.  Evidently in compliance with his son's request, the old man rose, muttered some unintelligible words, and with quiet dignity and a significant glance he grasped and pressed the officer's hand, and next mine, and resumed his seat.  Then the young man, also speaking words we did not understand, and likewise with a look full of meaning, extended his hand to us respectively, pressed ours, and, turning from us, he placed his palm on the open Bible and rested his eyes upon it, as if with affection and trustfulness.  I could only conjecture that the hand pressure, with the words spoken, was meant to express goodwill and gratitude for sympathetic attentions given him.  An hour later the cell was in darkness and the door closed, but not bolted and padlocked.  The inanimate form within needed not to be kept in with bar and key, nor could bolts and locks prevent the escape to a higher and purer sphere and to liberty of the man who occupied the form.  -"Memorials of John A Torrance, agent for thirty years of the Patients' and Prisoners' Aid society."

One of the Maori prisoners named Waati Tumoerangi, under a sentence of three years' penal servitude for high treason, died in the gaol at 3 on Saturday afternoon. The cause of death was tubercular disease of the lungs, from which he had been suffering for about six months. The deceased had been confined to his bed since the 3rd inst., and was visited daily by Dr Hulme, Provincial Surgeon; and Dr Yates, Resident Surgeon at the Hospital, who were with him a few minutes before his death. His body was placed in a shell, and conveyed to the dead-house of the Hospital, where an inquest will be held upon it to-day. The deceased was about 30 years of age, and was a member of the Wesleyan Church. He has left a widow and two children at Wanganui. For several days previous to his death he was visited by the chief Tauroa and the Wesleyan catechist, who prayed with him, and read aloud portions of scripture. The Rev Mr Blake, missionary to the Maoris at the Heads, and Mr John Torrance, Gaol Chaplain, also visited him frequently. On Saturday afternoon he was visited by the Visiting Justices, Messrs R. B. Martin, W. D. Murison, I. N. Watt, and Captain Fraser. After their departure, the whole of the Maori prisoners, including the deceased's father and brother, bade him a very affectionate farewell. They appeared to be greatly affected, the tears flowing down their cheeks as they shook hands and rubbed noses with him, after the Maori mode of showing their love and regard, and a few minutes afterwards he expired.  -Otago Daily Times, 13/12/1869.


Wati Tumoerangi was one of 18 prisoners who died while serving their term in Dunedin.  Most of the rest were freed in March 1872. 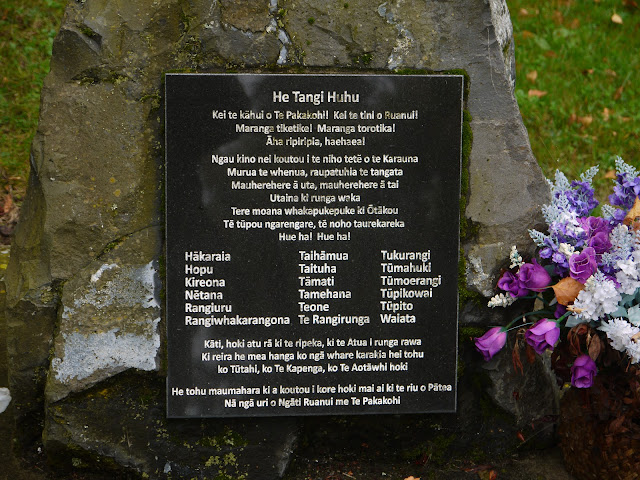 Posted by Otago Taphophile at 15:25