SHOOTING FATALITY.
(By Telegraph.—Press Association. DUNEDIN, this day.) Herbert George Gilchrist, aged eighteen, left his parents' residence at Oturehua at midday yesterday on a shooting expedition. His dead body was found last evening with a bullet wound in the side. It is supposed that the gun went off accidentally.   -Auckland Star, 19/5/1923.

Inquest
On the 20th inst an inquest was held by Mr Wm McConnochie, J.P., Acting coroner and a jury of six, of whom Mr John Nicholson was foreman, concerning the death of Herbert George Gilchrist, of Oturehua, farm labourer 17 years of age. Constable Young represented the police. Evidence was given by Thomas Alexander Gilchrist,brother of deceased, and Dr Cook, of Naseby. The evidence showed that deceased left his parent's residence at midday on the 18th inst to go rabbit shooting, and not returning by dark the relations became anxious and instituted a search party and scoured the bills behind Oturehua. At about 7.30 p.m his dead body was found by his brother (Mr T. A. Gilchrist.) There was a bullet wound in the lower right side of the body under the ribs, and a .22 calibre rifle (which he had been shooting with) was lying partly under the body with an empty shell in the barrel. The locality was rocky and covered with tussock.
The jury returned the following verdict: That the said Herbert George Gilchrist, on the 18th day of May, 1923, at Oturehua, came to bis death by a bullet accidentally discharged from a .22 calibre rifle which he was carrying.  -Mt Ida Chronicle, 25/5/1923. 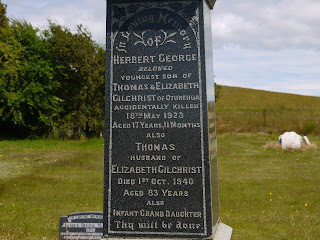 Posted by Otago Taphophile at 09:58