A REPORTED TRAGEDY.
SHOT BY A COMPANION.
[BY TELEGRAPH. — PRESS ASSOCIATION.] Dunedin, Tuesday. The inspector of police has received the following telegram from the constable at St. Bathans:— "Three youths, William Lockhart (20 years of age), Herbert Jopson (17), and Leslie Perry (13), were out shooting at Oturehua (Rough Ridge) yesterday, when Perry accidentally shot Lockhart in the head, killing him instantaneously."  -NZ Herald, 20/7/1910.

CENTRAL OTAGO SHOOTING CASE.
AN UNFORTUNATE OCCURRENCE. An inquest was held on Thursday at Oturehua on the body of William Lockhart, aged 19, the victim of the gun accident of the 18th inst. Mr W. M'Connechie, acting coroner, presided, assisted by the following jury:—Messrs F. Harrex (foreman.) W. Wilson. D. McLaughlin, T. Gillespie. J. Holland, and R. Andrews.
The evidence of H. Jopson (17) and L. Perry (13) went to show that the two elder ones had a gun each, and the younger one accompanied them, and shortly after setting out and seeing no rabbits to shoot at Leslie Perry expressed his intention of leaving them, as he had to go to the post office. Willie Lockhart, wishing to please his chum by giving him a shot out of his gun, handed him his gun, telling him to fire at a post in the fence, about 20 yards distant. Jopson suggested placing some article on the post as a better target, and while proceeding to carry out this idea he heard the report of the gun, and on looking round saw Lookhart on the ground. It appears that when the deceased handed Leslie Perry the gun — a double-barrel breechloader — it was fully loaded, and both hammers were up, deceased remarking, "You had better lower one hammer before you shoot." Leslie Perry, holding the gun across his left arm and chest, proceeded to lower the hammer, and in doing so the hammer slipped from his thumb and deceased, who was standing about two yards to the left, received the full charge of the resulting explosion immediately behind, the right ear, killing him, a medical examination afterwards proved, instantly. At one stage of the inquiry the gun triggers were examined, and it was seen that either was too strong for a boy to lower.
Herbert, Jopson deposed: I accompanied deceased and Perry when out shooting on the 18th. I proposed to hang a purse on Gilchrist's fence for Perry to fire at, and was walking away to do so when I heard the report of a gun. but I did not look back, thinking the gun was discharged into the air, but having placed the purse on the fence, about 20 yards away. I turned round and saw deceased lying on the around. Returning. I found Lockhart had been shot, the wound being behind the right ear. This was at 3.30 p.m. Perry remarked, "'Oh, what have I done?"
Leslie Perry, recalled, said: I dropped the gun after what I saw had happened, and afterwards placed it on the body of the deceased.
Fred Darling deposed: I, along with Jopson and Blackwell, went to where deceased was lying and found him dead, with a double-barrelled gun on his body. The left barrel was loaded, but the right contained an empty cartridge. The jury, after considering the evidence before them, brought in the following verdict:— "The said Wm. Lockhart came to his death at Rough Ridge through a gun being accidentally discharged by Leslie Perry, while out rabbit shooting/ and the jury are satisfied that it was a pure accident "
The funeral, which took place the same day, evidenced the popularity of deceased and the high esteem in which the parents and family are held, nearly 200 persons following the remains to the Blackstone Hill Cemetery, where a very impressive service was conducted by the Rev. J Harkness. To Mr and Mrs Lockhart and family the residents of the whole district extend their deepest sympathy in this sad and sudden bereavement. Great sympathy is also shown for the little boy Perry and his parents.   -Otago Witness, 27/7/1910. 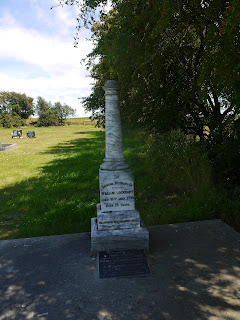 Posted by Otago Taphophile at 09:59