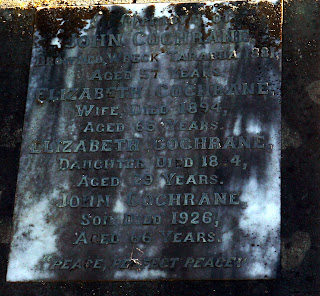 
The following very unique letter addressed "for President and Co, Public Hospital, Oamaru" with the superscription "Please publish all prompt" has been handed to us, to give effect to the sender's wishes. We despair of discovering his "argument" and leave it to our readers to excercise their ingenuity upon it as something new in the way of puzzles. This is it - we follow the writer's capitals and orthography:-
"Duplicate"
"Johnston Boarding House, Oamaru 9-7-1875. Dr Wait & Co: I left Waimate and came to the Elephent Hotel, Otago. I was advised to go direct to the Hospitel. I changed my Sleeping Hut for Large Tent on Tuesday last, and sinse Wednesday I have been unable to swellow my Meat, & now Tea cannot make its way over. About 18 year ago I had a similar complent. For four days my throat was closed. Some Spirits made vent first. Since that time I have required no Medical help and has not taken Drink Stronger than tea the past eleven year. I hope you do your duty. Amen. John Cochrane, Midholm, Trotter Creek, Oamaru. Copy. Oamaru, Otago, NZ. 10th July, 1875. To President and Co, Oamaru Hospitol. I had view inside your Institution. Your Medical advisor would not Admit me, altho willint to pay 40s per week. Circumstances alter cases. If my Dress were changed properly, I might have the honor of explaining myself in Lawful Assembly to Publican and Sinner. Then there is great Reform &c. sinse I commenced my Stage Life on 20-2-1824, and all is Well that ends Well. This Notice has a place in a Book that might be Published and Sold on Each Side the Line by & by. It was commensed on 1-1-1871 and might be finished on 1-1-1878. I may have vesited different parts of Australasia , Europe and America by that time. Seeing is believing, and felling being the nacked truth. I Read, Study and try to practise The Holy Bible. My own Conscience and God's Holy Wise Providence desires all to do the same. Amen. John Cochrane, Legal, Loyal Volunteer, Midholm, Moeraki, Otago, NZ.
...there is more in the same vein, and hints of much more to come from the strange John Cochrane. The Newspaper replied:
"We imagine if all the hundreds of pages are like the foregoing that they would require a good deal of 'explaining personally,' but meantime, if the signature is not fictitious, the writer of this strange epistle surely requires looking after."
John Cochrane's letter had its sequel, which came "from our own correspondent" in Hampden:
"You have at last gratified the heart's desire of poor old John Cochrane, I see by putting one of his effusions in print, but if you had known him, Mr Editor, you would have taken pity, and put his manuscript in the fire. The man is a well-respected substantial cockatoo of this district, and thoroughly up to his business, but he has a mania for writing such absurdly incoherent productions as that which you printed, and sending them to persons of exalted station. His friends have many a hearty laugh over some of his letters, which are sometimes amusing enough for their very absurdity, but I am sorry to see one of them getting into print, both for his own and for his family's sake.
John is on record as having written at least once to the Oamaru Borough Council - two months after publication by the North Otago Times - commending them to read the Bible from cover to cover. His letter was not admitted to the Council meeting but "One Councillor thought it was so good that he requested permission to take the previous document home, and on a vote being taken leave was granted."
A further appearance of Mr Cochrane in the papers was occasioned by a letter sent to the Mayor of Christchurch and a similar one to the Resident Magistrate. Police were "directed to make enquiries" and their report, as Douglas Adams might have put it, was "Mostly harmless." 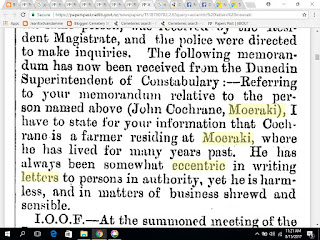 From his letters I can ascertain that John was born in 1824 and arrived in New Zealand in the 1860s, having previously made his way on foot through the countryside between Sydney and Melbourne. He was awarded land in Trotters Gorge by Crown Grant in 1865.
In 1881, John and his son took ship for Victoria, Australia, apparently to take up land there. The ship was the SS Tararua which hit and stuck fast to a reef near Waipapa Point in Southland. The Tararua was pounded to destruction by a high overnight sea and John Cochrane was among the victims. His son survived.
Posted by Otago Taphophile at 14:28