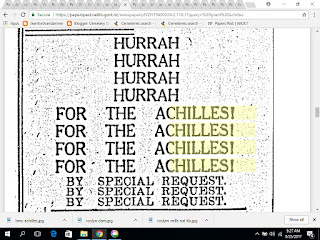 Ian William Grant was born on the 25th of November 1921 and grew up on Cavell Street in Tainui, Dunedin.
He joined the NZ Division of the Royal Navy in 1939, just before the outbreak of World War II.  After training he was posted to the light cruiser HMS Achilles in August of 1939 just before deployment to the South Atlantic Ocean.
The Achilles was hunting for the German commerce raider KMS Graf Spee.  After a radio warning from the Doric Star just before the Graf Spee sank it, the Achilles and two other cruisers (light cruiser Ajax and heavy cruiser Exeter) positioned themselves off the River Plate estuary.  It was a tactical gamble - the Spee outranged all of the other ships, with its larger guns.  The cruisers had the advantage of attacking from different directions with the advantage of one ship being clear of enemy fire at any time.
At 6.21am on December 13, 1939, the Graf Spee was sighted.  All ships ran up their Battle Ensigns, not to be lowered until the fight was over - one way or another.  On Achilles a signalman ran to the mast, shouting "Make way for the Digger flag!"  The Royal New Zealand Navy Ensign was raised for the first time.

Ian Grant's station in battle was at one of the four inch guns.  They were lighter than the main armament of six inch guns and had shields rather than turrets.  A near miss from the Graf Spee sent jagged shards of metal over the Achilles and killed four men.  In the words of Able Seaman Huia Beesley, also on the gun - "Unfortunately young Ian Grant who was alongside of me copped it in the chest. He died immediately. A chap…dropped to the deck [wounded]…there was no use leaving him there, we couldn’t do anything as far as firing was concerned. I picked him up, threw him over my shoulders…to get him down to Sick Bay."
One of the three cruisers facing the Graf Spee got a very lucky shot in.  It destroyed a vital piece of the Spee's equipment, the oil purification plant which was vital to operating the Spee's diesel engines.  The desalinisation plant, essential for drinking water at sea, was also destroyed.  When the Germans ran for the neutral port of Montevideo it was with very little usable fuel left.  The cruisers' crews weren't to know it but there was no way for the Spee to return to sea and the 72 hour period allowed by international law to stay in a neutral port was in no way long enough to make repairs.
While the Spee's Captain, Hans Langsdorff, communicated with his superiors in Germany the three cruisers kept watch in international waters.  Repairs could be made and the dead buried at sea.  The body of 18 year old Ordinary Seaman Ian William Grant was committed to the deep at 10am.  His was the first New Zealand death in uniform of World War Two.
The Graf Spee came out of port on December 17th and the three cruisers were ready for another fight. To the crews' amazement, the Spee stopped, the last of its crew left, and the ship blew up.  It burned for two days.  Captain Langsdorff shot himself, lying on the Spee's battle ensign.

Note - The Achilles, although flying the "Digger flag" against the Graf Spee, was not officially a New Zealand ship.  It was on loan to New Zealand from 1936 and commissioned as a RNZN ship in October, 1941.  After return to the Royal Navy in 1946, the Achilles became the Indian Navy Ship Delhi.  When the Delhi was scrapped in 1978 one of the main gun turrets was gifted to the New Zealand government and now stands at entrance of the Devonport Naval Base, Auckland.