Mr and Mrs Charles Frederick Glegg lived in Smith Street, Dunedin.  Charles was a civil engineer and Helen was a wife and mother.  Both were originally from Scotland, arriving in 1880, and Charles had a strong interest in Scottish culture and knowledge generally, being a frequent writer of letters to various editors on a wide range of subjects - from effigies at Westminster Abbey to six-toed people.

They had three children - Henry, born in 1872; Frederick, born in 1883; and a daughter, described as being "of feeble intellect," born about 1884.  Helen took in boarders in their Smith St house.

Young Frederick Glegg died at the age of ten in 1893, and some time later the family moved to Lees Street.  Charles died there in 1912 at the age of 72 and it was not long after that tragedy that Helen Glegg's life took another direction.

Shortly before 7pm on June 12th a Dr Lindon took a telephone call and a man's voice reported a very ill young woman who needed his help.  The same man called an hour later, saying that the case was urgent.  He arrived at Mrs Glegg's house in Philips Street just after 9pm to find a young woman in bed, dead and still warm.  As was his duty in such circumstances, Dr Lindon called the police.

Police Detective Hall, with Sergeant Thomson arrived at eleven the next morning and found the body of Olive May Pile.  Certain "instruments" were secured and, while searching the rest of the house, tried to open a door when Mrs Glegg held it shut, saying "There is no one in there."  Hall opened the door anyway and found a second young woman, alive but very unwell.  The second young woman was Rose Williams, an orchardist's daughter from Alexandra and she was suffering from septicemia caused by an illegal abortion.

Olive Pile's story was a simple one.  A fisherman's daughter from Karitane, she had recently left home and taken a job as a domestic servant in Oamaru.  She was 20 years old and had been seeing a young man called Thomas Burnett, a railway surfaceman.  Olive became pregnant and there was a meeting between the two of them and Olive's father - who shortly after called the police.  Olive and Thomas took a train to Dunedin and then the St Kilda tram to Kensington, to 15 Philips Street.

There, they met Helen Glegg - though it became clear to Thomas that Olive had been to Philips Street before.  Thomas was asked by Helen - "What are you going to do?"  Thomas replied -  "I don't care what it is going to cost, I am prepared to pay  it."  He was told that the price to pay was twenty pounds. Burnett handed over the cash - a ten and two fives - and Helen Glegg left him and Olive alone in the sitting room.  Shortly after, Thomas left and returned to Oamaru.

A few days later, Thomas received a telegram which read "All well. M Pile"  The following Saturday Thomas returned to Dunedin, made his way to Philips Street and asked to see Olive.  It was around 10.15 pm on June 12.  "Are you the girl's boy?"  asked Helen.  Yes, replied Thomas.  Helen then told him the tragic news.

Helen Glegg was arrested on two charges of "performing an illegal operation," referring to the abortions performed on Rose Williams and Olive.  She was later charged with the murder of Olive May Pile.

The trial was, as you might expect, a dramatic one.  Rose was unable to testify initially, still gravely ill in hospital.  Thomas Burnett gave evidence as to his part, and police presented four pieces of wire, described as meat skewers, one of them bloodstained.  Other equipment was produced in court, described as "the favourite instruments used for abortion."

The Government Pathologist gave his verdict on the cause of Olive's death - septicemia.

Alfred Hanlon, Glegg's lawyer, successfully defended her by pointing out that, in order to commit murder, the accused would have to have intended to kill Olive May Pile, which was obviously untrue.
The jury's verdict on the charge of murder was an easy one.  She was found guilty, however, of "performing an illegal operation" on Rose Williams but the jury recommended mercy from the court in view of her age and infirmity.

Helen Glegg was then tried for "performing an illegal operation" on Olive Pile.  The jury found her "not guilty" on the weight of previously presented evidence.  At her sentencing regarding Rose williams, Alfred Hanlon spoke on her behalf, referring to her advanced age (72) and the fact that she was left a widow seven or eight years before in very poor circumstances.  She had no way of making money for herself and her "mentally deficient" daughter and that was the reason why she had been  "tempted to follow the occupation that had brought her into the present position."  Hanlon expressed his fear that, such was her physical condition, any prison sentence would be a death sentence.

The Crown Prosecutor stated that since the death of her husband she had carried out abortions  "There had been some serious cases, but the corroborative evidence was not strong enough to bring her before the court.  She was looked upon as a very serious danger to the community."  The Gaol Surgeon reported that her health had been failing since her arrest.

She was sentenced to eighteen months in prison, without hard labour.

Helen did her time and moved in early 1923 to a house in Nairn Street, Kaikorai, boarding there with her daughter.  On September 3rd, 1924 Helen hanged herself with a jersey belt from a pedestal bed. She had been drinking heavily and worrying about her situation.  A coroner's jury returned a verdict of death by strangulation.  The fate of Helen Glegg's daughter is not recorded in the newspapers - even her name was not reported.  Perhaps, with her mother gone, she went to the Seacliff Asylum.

Rose Williams, if she is the same Rose Williams in the cemetery at Alexandra, died a widow at the age of 60.  The Philips Street house, if not demolished earlier, would have gone to make room for the new Southern Motorway from the Oval to Caversham. 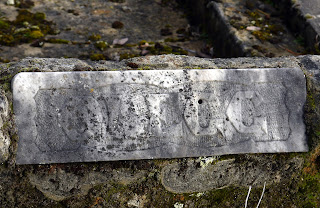 Posted by Otago Taphophile at 14:24