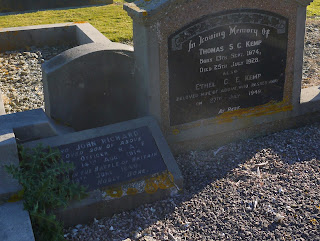 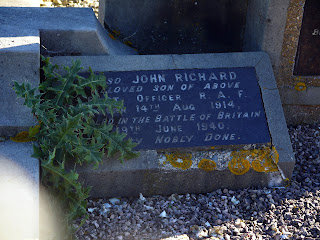 
In the Hampden cemetery is a rare but not unique epitaph, "Died in the Battle of Britain."  As soon as I found details of his life and death in the RAF, I said to myself, "Oh dear..."

Pilot Officer John Richard Kemp flew a Boulton Paul Defiant.  He joined the RAF in 1938 and by 1940 was a well-trained regular officer.  His squadron, 141, converted to the Defiant from the Bristol Blenheim in April 1940. 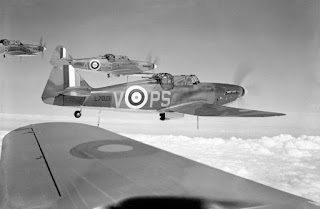 The Defiant was, depending on who you read, either an unfortunate victim of changing wartime circumstances or an ill-conceived death trap. It was designed for a coming war which was anticipated to be similar to the Great War - a static front line with bomber assaults on military and civilian targets behind it.

Those bombers would be arriving without fighter escort, due to the range between Germany and Britain being too far for the limited fuel capacity of a single-engined fighter plane.  So the Defiant was designed.  It was a two-seat fighter with the gunner in a powered four-gun turret.  The crew would find their enemy bomber, position themselves beside and below and fire the turret guns.

The fall of France, of course, changed all that.  The shock of suddenly finding Luftwaffe airfields on the French coast was a profound one.  The first Defiant squadron, 264, soon realised during training that their plane was no match for a modern single-engined, single-seat fighter.

However, the Defiant was quite successful in combat to begin with, especially against German bombers.  With a shape similar to the Hawker Hurricane, it was often attacked from behind and above by German fighters - ideal for the gunner with his four machine guns.  But the Luftwaffe soon realised what they were dealing with and the Defiant's days were numbered.  264 Squadron had developed a defensive tactic of flying in a circle and losing altitude and had shared their discovery with 141 Squadron - which ignored it.

On July 19, 1940, nine Defiants of 141 based at Hawkinge airfield were sent to cover the progress of a convoy of ships in the English Channel off Folkstone.  Soon after taking off they were attacked by Bf 109s.  Six of the nine Defiants were shot down and John Kemp was in one of them.  It was their first mission.

John Kemp's father had been a police Inspector and he grew up in Timaru and Wellington.  He initially joined 54 Squadron which had two other New Zealanders and flew Spitfires.  His transfer to 141 wasn't appreciated by his mates in 54 and, after serious losses over Dunkirk, the Squadron Leader of 54 put in the paperwork for his return.  Unfortunately for J R Kemp, the request was answered by the transfer of a J L Kemp.  John Kemp stayed with 141 and met his fate in the sea near Dover. 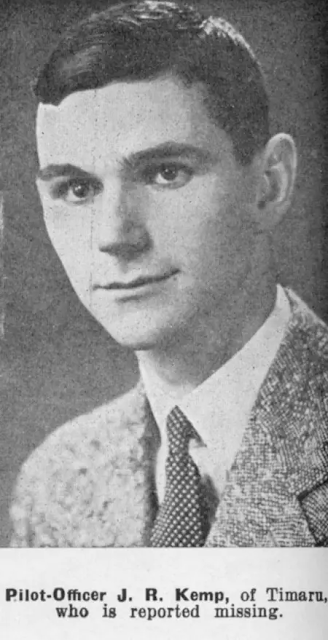 Posted by Otago Taphophile at 21:12